Is your garden overflowing with tomatoes?  Or do you have some less than perfect specimens that aren’t really pretty enough to serve in your salads?  Making homemade marinara sauce is the perfect answer.

Supposedly plum tomatoes (or roma tomatoes) make the best sauce, but I use whatever I have around.  My last batch of tomato sauce was simply a collection of tomatoes too ugly to be served in public.  To get the tomatoes ready to be simmered down to a tasty sauce, you first have to peel and seed them.

Step 1: Bring a large pot of water to a boil.  Prepare the tomatoes by cutting off any inedible portions and remove the core.  You can also make an ‘x’ in the bottom of the tomato to help aid the peeling process. 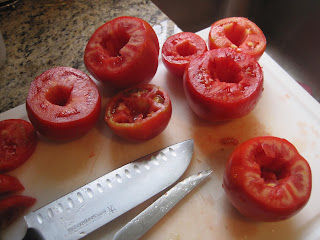 Step 4: Remove the skin by gently peeling it away from the tomato.  Also remove most of the seeds – without losing too much juice.  I usually only minimally attempt to remove the seeds and don’t find that it affects my sauce in the end. 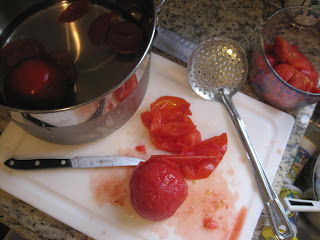 Step 5: Cut the tomatoes into large chunks, ready to be simmered for sauce.

I rarely have time to prepare my tomatoes and simmer a sauce on the same day so I pop the prepared tomatoes into the fridge and get around to making the sauce on another day.  My dad would actually prepare large quantities of tomatoes and then put them in freezer bags to prepare the sauce as needed weeks or months later… preferably when there was snow on the ground and the outline of our summer garden was no longer visible.

1. Saute 1 large onion, thinly sliced, in about 1 to 2 tablespoons olive oil until it is almost caramelized (very brown) – don’t cook it on too high of a temperature or the onions will burn.

2. Add garlic.  I like to use roasted garlic in my tomato sauce because it adds a really nice flavor but you could also use diced fresh cloves of garlic if you prefer.  (Click here if you want to know how to roast garlic.)  Believe it or not, even for this small batch of sauce, I roasted four bulbs of garlic and used them all!  Delicious.  Make extra and rub some roasted garlic on crostini to serve beside your pasta and sauce…

3. Add in a combination of your favorite Italian dried herbs – rosemary, oregano, basil, thyme – about 1 tablespoon each.  Add in a dried bay leaf if you have it.  Dried herbs are better to use when you plan to simmer your own sauce because the flavor holds up better.  If you want to use fresh herbs as well, put them in almost at the end of the simmering or when you reheat the sauce to serve.

4. After the onions have been nicely browned and the garlic and herbs have been added, you can add in about 1/4 to 1/2 cup of red wine if you have it.  Sometimes I have it, sometimes I don’t.  If you have the red wine, scrape the bottom of the pan (deglazing it) while stirring for about 2 minutes or so.

5. Add the prepared tomatoes.  Simmer on a very low temperature in a large pot for about an hour to 2 hours, gently breaking up the tomatoes and stirring occasionally.

This is obviously a very basic recipe!  You can add in additional veggies – carrots, zucchini, mushrooms, etc. or even meat if you wish.  I sometimes find that I will simmer down my sauce, store it away for later, but when I go to thaw it or take it out of the fridge, I need to add a little bit of tomato sauce to thin it out.  Possibly I over-simmer it the first time around!  Play around with the recipe and I am sure you will find your favorite version.  Enjoy!