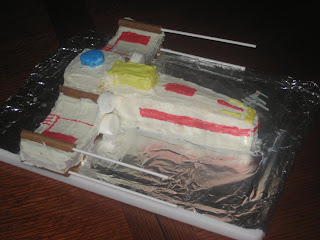 Believe it or not, this lovely creation was for my husband, not my son. Apparently, B felt left out of the cake action. After Q got a Little Einsteins Rocket cake, B felt that he should be able to pick something fun for his birthday – who cares if he is 34, not 4? I jokingly told him I would make him an R2-D2 cake due to his love for all things Star Wars … his reply, “How about an X-Wing Fighter?” X-Wing Fighter? Seriously? Well, I did my best…

This was actually a lot easier than an R2-D2 cake so I think it worked out in the end. I started out by baking 2 mini loaf pans and one large flat layer (in a pan about the size of a cookie pan but a little deeper). I let everything cool over night and put the pieces together on day 2. My vision was to use the mini loaf pans for the wings and slice the jelly roll cake layer into three even strips to use for the body.

Step 1. Body – Slice jelly roll cake into three layers. Lay one thin layer down the middle of your space. I decided to use white frosting. I debated between white and gray – but decided white would work. Easy won out. Frost your one thin layer and place the second thin layer on top. Taking a sharp knife, shape the cake so that the front looks like the nose of the plane.

Step 2. Cockpit – take the third slice and cut out 2 pieces that can serve as your cockpit. One part of your cockit will be where R2-D2 sits and the front part of the cockpit, of course, will be for Luke Skywalker. If you have an action figure to use in your cake – all the better.

Step 3. Wings – slice the bumpy tops off your mini loaf pans and place them to the sides of the body. Frost with white frosting.

Step 4. Engines, etc – I used Pepperidge Farm Pirouettes (cylindrical cookies), marshmallows cut in half and long lollipop sticks from Michael’s to create my engines, rocket boosters, etc. I stuck toothpicks into the chocolate middle of the pirouette to attach 1/2 of a marshmallow and stuck that under each wing where the wing touches the body and on top of each wing where the wings touch near the cockpit. I used 4 more pirouettes for the end of the wings where the long stick-like things point out almost as long as the body of the plane itself. I simply stuck the lollipop sticks into the chocolate middles of the pirouette and placed one under and one over each wing on the end.

Step 5. The details – I bought a 4 pack of primary color fondant writing gels (also from Michael’s) to create the red and yellow details on the body of the plane. I outlined the different shapes, scribbled gel in the middle and then smoothed it out with a knife. It came out quite nicely.

Enjoy! This was not very hard and it got rave reviews from our friends. Let me know how it goes!