If any of you have children who are fans of Martha Speaks (a book series and now a show on PBS about a talking dog who eats Alphabet Soup), perhaps Alphabet Soup has been a frequent request in your house.  My son has been begging for Alphabet Soup for a week and I finally was inspired to make it tonight.  This recipe is really delicious and quite easy.  We had Taco Tuesday this week and had a little bit of leftover taco meat so I threw that in as well.  A delicious addition, but not necessary. 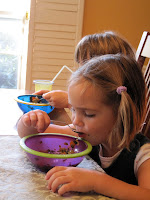 Saute onion, carrots, celery, and garlic in the olive oil for a few minutes until the veggies are slightly tender.  Season veggies with salt, pepper, and paprika.  Add chicken broth, water, and spinach.  Bring to a boil.  Reduce to low and simmer for about 30 minutes.  Add the cooked meat (optional) and the alphabet pasta.  Return to a boil and then reduce to a simmer for about 10 minutes until the pasta is cooked.