I am a little late to the Meyer lemon craze – until last week I hadn’t cooked a thing with them and, quite honestly, I wasn’t even sure what everyone was talking about! And then I saw them on sale at Earth Fare … 10 for $2 – how could I say no? With spring fast approaching, I am starting to clear out some of my prized freezer possessions (like some of the delicious North Carolina blueberries I purchased weekly by the gallon last summer) – lemons and blueberries – a delicious combination! 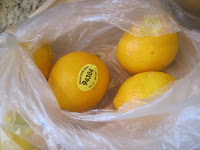 Meyer lemons seem to be beloved because they are slightly sweeter and juicier than traditional lemons. In fact, I read that they are a citrus fruit that is actually a cross between a traditional lemon and a mandarin orange. For this recipe, I used the juice and zest of one lemon in the bread and the juice of the other lemon in the glaze and then I tossed the lemon rinds into the garbage disposal to freshen it up a bit. My kitchen smelled so clean!

For this recipe, much like my poppy seed bread recipe, you must make the lemon glaze to go over the bread or it isn’t nearly as delicious as it could be! The glaze consists of 2 ingredients – confectioner’s sugar and lemon juice. It is too easy to skip this last step…

Ingredients for the Bread:

1. Combine the first six ingredients – butter, oil, sugar, salt, lemon juice, and lemon zest – in a large stand mixer.
2. Add the four eggs. Mix it again until the eggs are well incorporated into the batter.
3. Add the flour and baking powder. Mix again.
4. Add the milk. The batter will become very thin as you mix in the milk.
5. Toss in the blueberries but do not use the stand mixer! Gently fold the blueberries into the batter.
6. Pour batter between 2 greased loaf pans and cook at 350 degrees for an hour until the top has a golden color.

Squeeze the juice from one lemon and add about 1/2 cup of confectioner’s sugar in a small saucepan over medium heat. Stir well so that all of the sugar has dissolved into the lemon juice. Heat just until boiling and then stir and cook it on medium for about 2 minutes. Pour warm glaze over warm bread.  I like to prick my bread with  a fork dozens of times before I pour the glaze over it so that the glaze seeps into the top layer of bread! Delicious!

** Tip for squeezing lemons… I have been told that if you warm a lemon in a microwave for 20 seconds, you can get more juice from it. I am not sure about that – I never tried it. However, I seem to find that if you roll the lemon around on a hard surface with the palm of your hand before you cut it in half to squeeze it, that results in more juice! 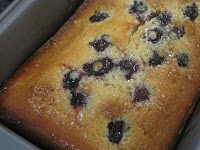