Pickles! Make Your Own…

Continuing my garden-a-plenty theme for the week… we had A LOT of cucumbers that looked perfect for pickling.  They are small, green, bumpy little guys that are absolutely perfect for slicing up.  Truth be told, I have never pickled or canned a thing in my life, but at 36+ weeks pregnant, I was looking for a little adventure.  This seemed to do the trick!

Having recently relocated to Charlotte from the slightly cooler climes of New England (go Sox!) I love the fact that my local grocery store here in NC sells a wide array of canning supplies, taking up a substantial portion of one of the food aisles.  I can’t say that I have seen either mason jars or pickling salt lining the shelves at my old Stop and Shop.  Not that I was looking…

Making pickles was not hard.  I promise.  In fact, the hardest part was sterilizing the jars and the lids.  To sterilize the jars, I ran them in the dishwasher.  To sterilize the lids, I threw them in a pot of boiling water for ten minutes.  (Kind of like I used to do when I actually sterilized bottles for my first child…)

The day before I began the pickling process I tossed my cucumbers (about 8 of them) in a bowl of ice water and let it sit in the fridge overnight.  I have read that this helps make them crispier! 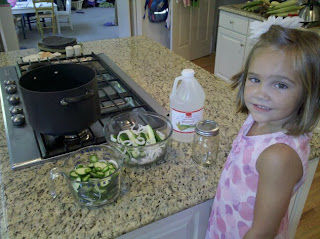 1. Combine 1/4 to 1/3 cup of pickling salt (I bought a large bag of Ball Pickling and Preserving Salt right at my Harris Teeter grocery store), 3 cups of white vinegar, 2 cups of water, 1/4 c. sugar, 1 Tablespoon mustard seed, 1 Tablespoon dill seed in a non-stick pot.  Bring to a boil.  Stir well until all the sugar and salt is dissolved.  ** This amount of liquid just covered the cucumbers in my four jars – you might want to consider doubling the recipe (but you probably don’t need to double the salt) if you have more cukes to pickle.  (My original recipe called for 1/2 cup of pickling salt but that really was a little too salty for my taste!  I recommend cutting it back to 1/4 or 1/3 cup.)

2. I used four 8 oz. mason jars for my 8 (or so) cucumbers (about 3 to 4 inches long).  Cut the ends off the cucumbers.  Slice the cucumbers (whichever way you prefer) and place them in the jars while your pickling liquid is coming to a boil. I also added sliced onion, garlic, and jalapeno peppers from my garden to some of the jars to add a little zing!  I added about 1/2 teaspoon of mustard seed and dill seed to each jar.

3. Ladle the boiling liquid over the cucumbers until they are covered.  Carefully take the hot lids and rings from the water (hot water, not boiling) and seal the jars.  Place the lid on tightly, hold it down with your fingers and then firmly screw the ring on.  It seemed a little tricky at first, but I eventually got the hang of it.  Let the jars sit until they are at room temperature – then refrigerate.

I have read that you should let your pickles sit anywhere from one week to three weeks.  They should be eaten within a month or so of opening them.  Enjoy! 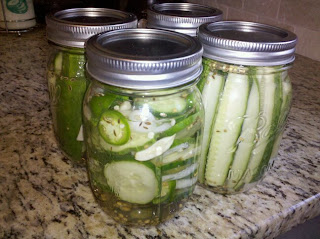