My friend and I were discussing meatloaf the other day … seriously, it took up the better part of an hour conversation. When she left and I glanced around my kitchen to think about what to cook for dinner, I couldn’t get the thought of meatloaf out of my head. However, when I saw five gorgeous bell peppers sitting on the counter, I had an even better idea … why not try my hand at stuffed peppers?!

Stuffed peppers are basically peppers stuffed with meatloaf and then baked! How easy can you get? I have to admit, these turned out really, really good. It might be one of the better dinners that I have cooked in a while. The trick to making super flavorful stuffed peppers is to make an amazing “meatloaf” like filling. If your filling isn’t tasty, there is no hope for your entree at the end.

The peppers in the photo above were actually a gift… I grow a lot of peppers, but for some reason, the bell peppers don’t love my garden. Or, perhaps, my dogs are quicker at harvesting them than I am… Thankfully, the fabulous Farmer Kirk dropped some of these beauties at my house last week.

If you have about 1 1/2 cups of leftover cooked rice on hand, this recipe is a lot easier to prepare. I like to always make too much rice early in the week so that there is some leftover to add to soup or tacos or a stir fry as the week progresses and I start to lose my cooking mojo. It makes dinner preparation so much quicker!

Cut the tops off of the bell peppers and finely chop them up and add them to your chopped onion and garlic. Using a paring knife, carefully remove the seeds and membranes from the inside of the pepper and discard.

Heat a large pot of boiling water. When the water comes to a boil, submerge the peppers for about 5 minutes. Remove from the water carefully using a slotted spoon or tongs, drain and set aside.

Arrange the peppers in a deep dish pie plate or a 8×8 casserole.

Gently saute the peppers, onions, and garlic in about 1 tablespoon or so of olive oil. Add the chopped tomatoes and some sea salt. Continue to cook over medium to medium low heat, breaking down the tomatoes as you stir. Add the pasta sauce. Stir well and heat through.

In a large bowl, combine the egg, ground beef, and Worcestershire sauce. Use a large spoon or your hands. Add 1 1/2 cups of rice and about 1 to 1 1/2 cups of the tomato sauce mixture and mix well.  (If you have extra sauce, use it on top of the peppers.)

Using a medium sized spoon, fill the peppers with the ground beef mixture. Pack it in!!

Top the peppers with any leftover sauce. 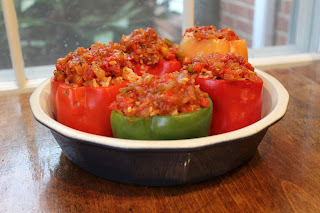 Top the sauce with grated cheese.

Cook the stuffed peppers at 350 degrees for one hour!

I served my children 1/2 of a stuffed pepper each with a little bit of plain rice on the side and some sliced tomatoes and cucumbers. My husband looked crestfallen that he could only have 1 pepper until I made sure that the kids would not actually eat more than their 1/2! Luckily for us, we were able to split the 5th pepper… phew! Definitely there were no leftovers at this meal.