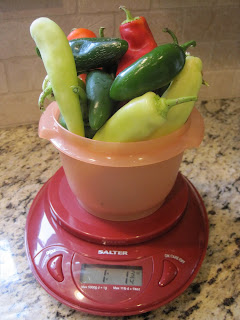 As soon as I got home, I headed outside to pick some peppers… I needed about a pound of peppers and, conveniently, I was able to pick about a pound of peppers right from my garden.  When I was little, my mom used to make bright green hot pepper jelly and put it in little jars – we would eat it on crackers over cream cheese.  Delicious.  The other day I was wandering around Dean & Deluca (sense a trend?) and impulsively bought a jar of hot pepper jelly.  I served it over fresh goat cheese on crispy rice crackers – it was really good, but I realized that I probably could make the same thing myself for a fraction of the cost.

Making hot pepper jelly really requires very little skill in the kitchen but you will impress your friends when you casually bring out your own homemade jars of this delicious goodness.  Hot pepper jelly will last up to 12 months unopened on a cool, dark shelf and about 3 weeks opened in the refrigerator.  I recommend you put these in small jars – maybe 4 to 6 ounces – you will need about 6 to 8 jars if you follow this recipe. 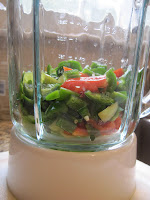 Seed and chop peppers.  Choose good, crisp peppers – I taste tested all my peppers before committing them to the blender.  Add the peppers to the blender or food processor with 1/4 cup of the apple cider vinegar.  Puree. 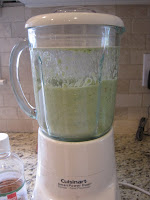 Add the pepper puree to a deep, heavy bottomed pan.  Add the remaining 1 cup of cider vinegar and the package of pectin (I bought my pectin at Harris Teeter) and bring to a rolling boil.  A rolling boil is when your liquid remains boiling even when you are stirring it.  (Some people choose to add food coloring to their hot pepper jelly – my mom would always add green.  Alas, I had no food coloring in the house so we went natural – I think it looked quite good without the bright green effect I fondly remember from my youth.)

After you achieve a rolling boil, quickly add all 5 cups of sugar.  Stir well.

Ladle the hot pepper jelly into prepared jars.  This batch made about 24 ounces of hot pepper jelly but the amount might vary a bit depending on the amount of peppers used.  I did not have a funnel at the ready so I ladled the hot liquid directly into the jars.  It was messy.  And hot.  Leave a bit of room at the top of each jar.  Before securing the tops of the jars, take a wet towel and wipe away any sugary mess that remains on your jars.  Secure the tops and set aside at room temperature for 24 hours.